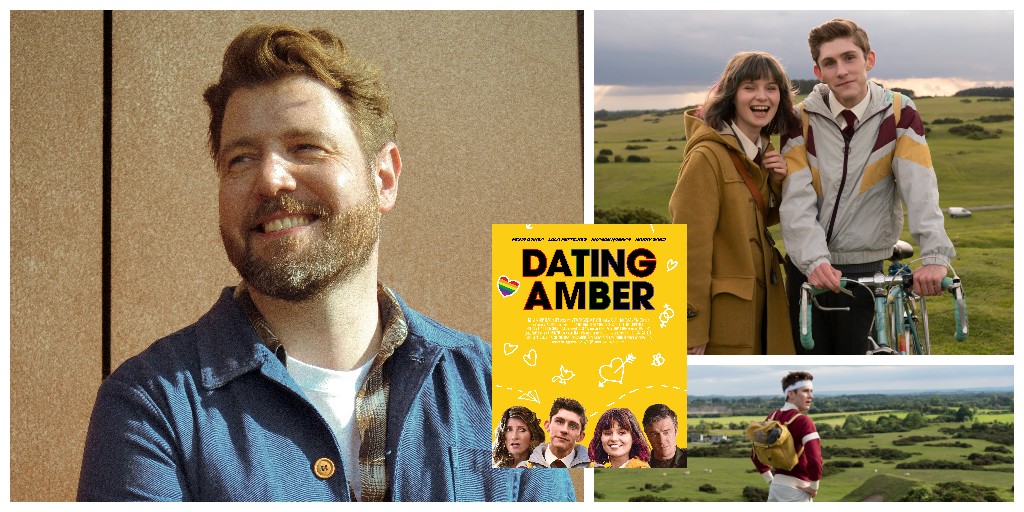 Ahead of our SPECIAL PRIDE SCREENING of Dating Amber on Tuesday, 21 June we chat with writer and director David Freyne about his inspirations behind Dating Amber, how important it was to be able to shoot the film in the Curragh and why screening his film in Newbridge is “…a weird and wonderful full circle moment.”

Though not your first feature, Dating Amber feels like a film you had been planning for quite some time. When did you have the initial idea for the script and what was the journey from there?
Dating Amber was in my head for a decade before we made it. At one point it was going to be my first film but the money just didn’t come together then. But it’s such a personal one that, if I hadn’t made it yet, I’d still be desperately trying to make it.

You’ve created a very Irish (very Kildare!) story of coming out yet one which speaks to all LGBTQ+ young people exploring their identity. How did you find that delicate balance between the personal and universal?
I think the more personal you are, the more universal your story will be. So I just set out to make my film and show my experience of growing up in Kildare but I know I’m not that unique. Being closeted, struggling with your identity or just being young and insecure are all very universal experiences. There are Eddies and Ambers in every country and every small town. 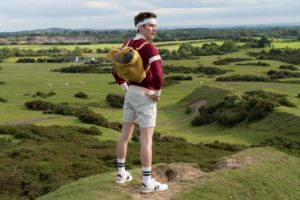 The Curragh camp and plains look fantastic – how important was it to you to use a location so central to your own life?
It was everything to me. So much of my anxiety in making this was if we would get permission to shoot there. The plains are such a hidden treasure in Ireland and the camp is just mad. A toy town with random tanks and soldiers wandering about. You simply can’t recreate it elsewhere. I was desperate to bring it all to the screen.

The 1990s setting seems very significant and looks great – was this era always integral to the story, or did you consider shifting it in time?
It’s a few years before my own teenage years but I just loved that era of fashion and music. And setting the film at the time of the divorce referendum, another major shift in Irish culture, felt really important. It’s a time that feels like a shift from the Catholic Ireland and into a more modern country. But mostly I loved the clothes and the music. 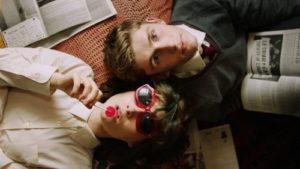 The performances are wonderful, particularly the leads Fionn O’Shea and Lola Petticrew, tell us a little bit about working with the cast? What did they bring to the filming?
I don’t know how to talk about them without just gushing with praise. The film would simply have not worked without them, or indeed the wider cast who were incredible. They brought so much of themselves to the film and their own deep friendship is the real emotional core of it. It helps that they’re also the nicest, kindest people in the world.

I should also give a particular shout out to the brilliant (and Kildare local) Evan O’Connor who played Eddie’s younger brother Jack. Next to our two leads, that was the hardest role to cast. He is a comedy genius and future star. I mean he was 13 and was able to go toe to toe with the Irish legend, Sharon Horgan. 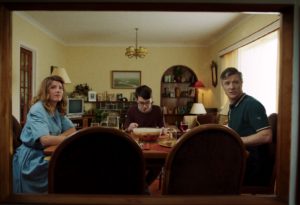 It’s VERY funny – was it difficult to find that balance between a poignant, very truthful story and landing a ‘rom-com’?
I was so worried about making sure what I thought was funny on the page came through. But, honestly, this cast just delivered every line and then some. From our leads to the brilliant supporting roles and even our day players. Every single one of them just cracked us up on set and really made the smallest moments shine.

I told you, embarrassed gushing.

We’ve come a long way… you’ll be delighted to hear that the Progress Pride Flag flies proudly year round at many of our local secondary schools, but yet the challenges of coming out are still very real for many young people and homophobic bullying is still a massive issue. What positive developments have you noticed and what changes would you like to see to make schools and society in general a safer place for all?
It’s extraordinary how far we have come as a country and to see Kildare, a place I was once so scared of, be so open and caring is incredible. But it’s so important we don’t become complacent. I think it’s vital that we teach children compassion and acceptance of all people from junior infants. Frankly replace maths with kindness studies (I was dreadful at maths),

Should I stay or should I go… a huge question for LGBTQ+ young people in particular, who often need the freedom of a fresh start – a new city or country – to live their lives to the full. Will this always be the case, do you think?
LGBTQ+ people and young people in general will always gravitate to bigger cities in order to find their tribes. But the key is that, if they leave, it’s for positive reasons and not out of fear, which was often the case.

I mean I would never have imagined a future in Kildare but I could easily see myself living there very happily now. I should stress, in case my Mam is reading this, I’m not moving back.

Stories of LGBTQ+ lives on screen can play a massive part in raising visibility and moving us along as a society – and Irish films that fit this bill are few in number!  Did you feel the weight of this while making Dating Amber?
I didn’t, simply because I was just focused on telling my story. But I also think the landscape for LGBTQ+ representation in Irish film and TV is changing for the better. So many of the incredible filmmakers that are coming up right now are queer and they are excited to tell their stories. So that gives me so much hope for the future of Irish film.

For people not joining us at Riverbank Arts Centre on 21 June, what other films (or TV series or books!) would you recommend for PRIDE week?
Big Boys on Channel 4 is beautiful and hilarious. And then just past films; But I’m a Cheerleader, Pride, Milk, the iconic documentary Paris is Burning. There is so much brilliant stuff to enjoy. I recommend everyone just takes a week off and goes through the library.

Like a lot of films made over the last few years, Dating Amber had a digital release and bypassed the collective cinema experience. Are you happy to have a big screen outing for the film in your hometown?
We were so lucky the Prime took the film on during the pandemic as it meant we reached a big audience in a way we simply could not have done without that support.

But there is nothing like playing to an audience and getting to screen the film in Newbridge is such a weird and wonderful full circle moment. Kildare is in the DNA of this film so having it play there is a real dream come through.

Dating Amber will be screened on Tuesday, 21 June at 8pm in Riverbank Arts Centre and followed by a pre-recorded interview with David. Tickets are available by booking online here or through the Box Office on 045 448237.